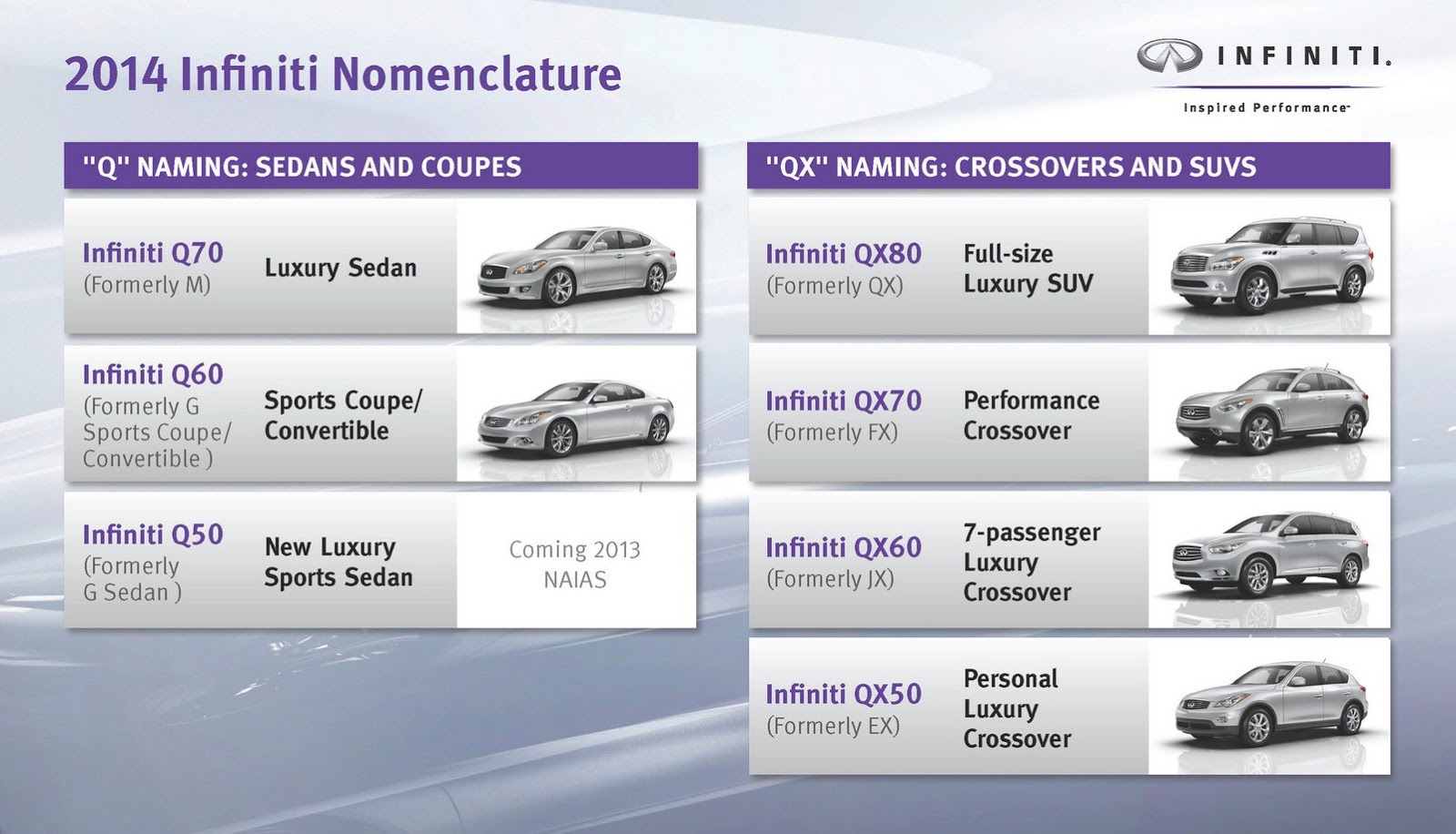 — Infiniti models from the 2014 model year to carry Q or QX prefix
–New nomenclature symbolizes new brand direction and the commitment
to Infiniti under the leadership of Johan de Nysschen
–The use of Q & QX captures the inspiration within the next generation of
Infiniti models, while relating back to Infiniti’s roots of the Q45
–New premium sports sedan to launch at the North American International
Auto Show in January will be first Infiniti to carry new Q badge

HONG KONG, December 18th 2012: Marking another significant step in its plan to further expand its presence in the premium automotive sector, Infiniti today announced details of a new nomenclature strategy to be applied to its complete product range beginning with the 2014 model year. The first model to carry Infiniti’s new Q badge will be the Q50, an all-new premium sports sedan to be unveiled at the North American International Auto Show in January 2013.

The premium automotive brand will see its model range simply prefixed either by Q – for sedans, coupes and convertibles, or QX, for crossover and SUV models. Each model will be further identified by a double digit representing hierarchy within the range. This strategic change reflects Infiniti’s desire for clarity and cohesiveness as it embarks on ambitious growth plans, including significant expansion of the Infiniti portfolio.

Commenting on the revised naming philosophy, Johan de Nysschen, President of Infiniti Motor Company Limited, said: «Over the past few months, we have talked at length with our retailers, our customers, and our business partners about our brand. The need for a new identity and direction to promote consumer familiarity with our model range as we expand the portfolio became evident. To achieve this, we clearly needed a simple and consistent nomenclature framework. After exhaustive research and evaluation, we concluded that ‘Q’ captured the inspiration within the next generation of Infiniti models, as well as emphasizing our performance credentials while harking back to our heritage with the Q45 – Infiniti’s first iconic flagship product in 1989.»

Infiniti’s new nomenclature strategy will be implemented in logical stages within the existing product range, as 2014 model year variants are introduced. The brand’s future plans include a range of next-generation Infiniti models that will carry Q and QX badging from the outset.

Infiniti, the premium automotive brand, reflects its brand promise «Inspired
Performance» with a model line-up of sedans, coupes, SUVs and crossovers featuring
exhilarating performance, emotive design and cutting edge technology. Infiniti
continues to launch across the globe through a dedicated network of Infiniti Centers
that share a commitment to exceptional hospitality throughout the entire period of
ownership.

Infiniti was launched in 1989 in the United States. Infiniti’s global footprint expanded
into Canada in 1990, Taiwan in 1997, the Middle East in 2004, Korea in 2005 and
Russia in 2006. Global expansion continued in 2007 with Infiniti Centres opening in
the Ukraine and in one of the world’s fastest growing luxury automotive markets,
China. In 2008 Infiniti launched in Western and Central Europe, which has added 19
additional markets. Infiniti is sold globally in 47 markets to-date.

Since May 2012, Infiniti Motor Company Ltd.’s new global headquarters is situated in
Hong Kong, headed by Johan de Nysschen as President of Infiniti on 1 July.